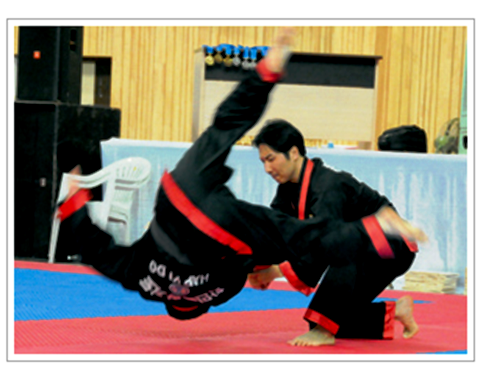 The essence of Hapkido lies in the unification of Chun Ki (heaven’s ki), Ji Ki (earth’s ki), In Ki (man’s ki) in the danjun and cultivation of ki through each respiration. This is coupled with external development of the muscles, joints, bones and skin. Through training, one develops mental and physical fitness and acquires the ability to defend oneself against hostile attack. Specific elements of Hapkido include yool sool, dan jun ki bub, kwon bub, jok sool, gum bub, bong sool among others and can be categorized into subparts according to given methodology. It is truly comprehensible martial arts that follow the principles of you won wha. It makes it possible for a person with less strength to defeat a much stronger foe. It is an ideal martial art that all people, men, women, young and old can easily learn and utilize in daily life. It is a martial art based on human physiology and scientific principles. It not only enhances health and fitness of martial artists, but it is also widely implemented in the military, police, and security for its effectiveness. Hapkido continues to grow and expand so that it is recognized and loved by millions of people all over the world.

Not many people actually know of the origins of Hapkido and, more importantly, what makes it unique. Controversy is nothing new to Hapkido practitioners. Since the time when Hapkido can be traced back to, there have been disputes between masters on origins and the true beginnings of this art. Three warriors from the Korean Silla kingdom around 400 years ago designed the system “Sam-Rang-Eui-Kwang”. Later, two masters of this system “Wang-Ga” und “Moon-In”, moved to Japan to teach their art. In 1921, professor Sik-Ji-Seong-Pyong renamed the system into “Dol-Gue-Ryu”. Parallel to this evolution, some martial arts were only taught inside Japanese family clans. (As example the Takeda clan – Samurai).

The most important persons in the history of Hapkido were it´s founder Choi-Yong-Sool, his first student Suh-Bok-Sup and Ji-Han-Jae, who is responsible for the worldwide spread of Hapkido since the early 60´s.

Daito-Ryu Aiki-Jutsu, which includes over 6,000 techniques, was developed in 1087 by the famous master “Yoshimitsu Shinra Saburo” and, until then, just taught inside the “Minamoto” (Seiwa-Gen-Ji) family clan. In 1946 Choi returned to Korea, but never was accepted by the most martial artists as a Korean native. Here it should be mentioned, that the founder of Ai- Ki-Do “Morihei Ueshiba” (1883-1969), only studied three years from 1918 to 1921 under Takeda.

After Choi was introduced by a master into the kicking art of “Tae-Kyon” and by another one into the Buddhist art of “Bulkyo-Mu-Sul”, he had the idea of combining these two styles with the art he had learned: the Yawara from the Takeda-Ryu system. As the result he wanted to create the most effective self defense system of his time. So Choi took 270 basic techniques, and broke them down into three categories:

All kicking techniques Choi ever used and integrated into his new system, were only applied on low level (groin, knee and ankle joint). To realize his idea, Choi appointed the following principles / concepts to his system:

On his return to Korea, Choi Yong Sool got off the boat in Pusan City and on the train to Yong Dong, his hometown. From there, he left and moved to Taegae city. Unfortunately, at the Younson train station, he was robbed. All the money and certificates he had were lost. Choi then worked as a bodyguard for Suh-Bok-Sup´s father, a member of the parliament. At this period, grand patriarch Choi-Yong-Sool called his martial art “Dae-Han-Hap-Ki-Yu-Kwon-Sul”.

In 1953, he used the name “Dae-Dong-Ryu-Yu-Sul” and one year later he called it “Yu-Kwon-Sool. Another name change was made by him together with his students Kang-Woo-Jin and Suh-Bok-Sub in 1956: The name “Hapkido” was born. In 1960, Choi founded the “Dae-Han Ki-Do Hwe” (Korea Ki-Do Hwe / Korean Ki-Do Assoc.) and in 1967 he established the “Jun-Moo-Kwan”. The Yu-Sool masters Han-Jae Ji and Mu Kim began using the name Hapkido in 1961. The “Dae-Han-Hap-Ki-Yu-Kwon-Sul-Kwan” was finally established by grand patriarch Choi, Seo-Bok-Sub, Jang-Song-Ho and Seo-Byong-Dong.