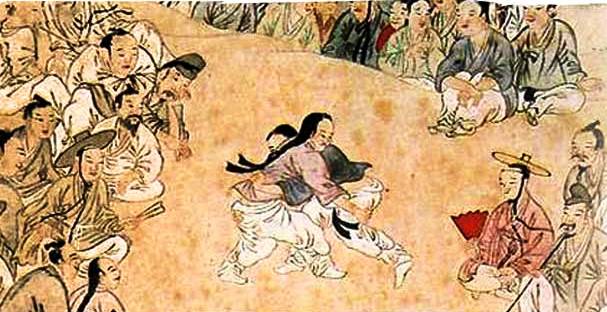 Taekwondo, which is the national martial art of Korea, is one of the proudest cultural heritages for the Korean people. Taekwondo has been developed into a modern sport as a result of painstaking researches and experiences by the Taekwondo practitioners through their incessant upgrading of technical and spiritual refinement.

The origin of Taekwondo can be traced to early history of the Korean peninsula where three tribes dwelling there, each enjoying warrior’s martial art contests during the ritual seasons. Korean peninsula, three kingdoms – Koguryo, Paekje and Silla all indulged in growing national strength with trained warriors. Therefore, the Korean history tells that there were military personalities among the well-known prominent national leaders of the three kingdoms, which proves the military tendency of ruling hierarchy.

In the modern times of Korea, which cover the Chosun (or Yi) dynasty (1392-1910), the imperial Korea and the Japanese colonial rule until 1945, Taekwondo was rather called “subakhui” than “Taekkyon” and it suffered an eventual loss of official support from the central government as the weapons were modernized for national defense, although the subkhui was still popular in the early days of Chosun. The Yi dynasty (Chosun) was founded on the ideology of Confucianism, which resulted in rejecting all Buddhist festivals and giving more importance on literary art than martial art. It was only in the days of King Jungjo after the disgraceful invasion of Korea by the Japanese (in 1592) that the royal government revived strong defense measures by strengthening military training and martial art practice. Upon liberation of Korea from the Japanese colonial rule after world war II , the Korean people began recovering the thought of self-reliance and the traditional folkloric games which resumed their popularity. Song Duk-ki, afore-mentioned master of Taekkyondo, presented a demonstration of the martial art before the first Republic of Korea President Syngman Rhee on the occasion of the latter’s birthday anniversary, thus clearly distinguishing Taekwondo from the Japanese karate which had been introduced by the Japanese rulers.

Martial art experts began opening their Taekwondo gymnasia all over the country and after the end of Korean War (1950-1953) Taekwondo was popularized among the dan-grade black-belters within the country, also dispatching about 2,000 Taekwondo masters to more than 100 countries for foreigners’ training.

After all, following the nomination of Taekwondo as a national martial art in 1971, the present Kukkiwon was founded in 1972 to be used as the central gymnasium as well as the site of various Taekwondo competitions. Then a year later on May 28, 1973 the World Taekwondo Federation came into existence currently having 164 countries as its members.

In 1973 the biennial World Taekwondo Championships was organized. In 1974, Taekwondo was admitted to the Asian games as an official event. In 1975 Taekwondo was accepted as an official sport by the U.S Amateur Athletic Union (AAU) and also admitted to the General Association of International Sports Federations (GAISF), followed by the adoption of official sports event by the international council of military sports (CISM) in 1976. In 1979, president of the World Taekwondo Federation (WTF) was elected President of the world federation of non-Olympic sports. The WTF became an IOC-recognized sports federation in 1980, making Taekwondo an Olympic sport. Then the adoption of Taekwondo as an official event was followed by the World Games in 1981, the Pan-American games in 1986, and finally by the 2000 Olympiad held in Australia.